No reviews yet Rate this Item 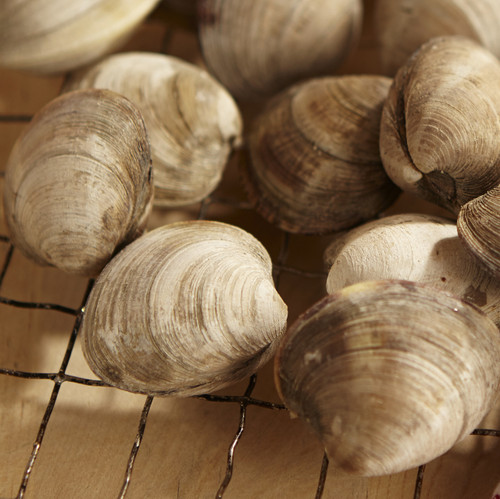 Some say sweet. Some say slightly salty. Many don’t even try to describe the delight of tasting fresh clams. Clams seem to embody and distill the very essence of the sea. And for good reason. Nature composed their seemingly simple system of nourishment to sift the shifting currents on the floor of the shore, selecting the tiny plants and organisms that pass by. They keep just what suits them. And it suits them very well indeed. When you buy fresh clams online from Boston Sword & Tuna, you can choose from a variety of fresh clams available.

Clams live in the intertidal zone, in the sand and mud between low and high tide. The plankton, algae, and microscopic sea creatures they encounter there for food are characteristic of the specific locale and temperature and currents of the myriad places where they live and grow. This way of life accounts for their miraculous ability to bring the sea to your own home when you buy fresh clams online.

A Little Bit About Clam Species

There are more 15,000 species of clams in the world, because they are composed from the very waters around them, and because the temperature, flow, and content of the water in their homes varies so greatly from place to place. Now, because you can buy fresh clams online from Boston Sword & Tuna, the clams that come to your table are a kind of travel experience in reverse, bringing to you the shore where they grew, without your ever leaving home, because of our fast, efficient, selective, and refined shellfish and online fresh fish delivery.

These thousands of clam species fall into two camps, hard-shell and soft-shell clams. The difference is based on where they live. Hard-shell clams, like the famous cherry stone and little neck clams, and the Virginia count neck clam so popular at Boston Sword & Tuna, live close to the surface of the sand, making the siphon they use to filter their food much shorter – and making a hard shell a good idea. Soft-shell clams, which often get called “steamers,” live deeper in the sand, so their siphon is much longer. And their shells are not really soft, but rather thin and brittle, because less protection is needed, down where they are found.

The basic flavor of both types is similar, and both can be used with similar recipes and preparations. But, you’re more likely to meet the hard-shell clam in a chilled display as an appetizer and a soft-shell steamer at a New England clam bake. The smooth, fluted shells of count neck, little neck, and cherry stone clams make them particularly attractive served on the half-shell. Such a presentation tells guests and family alike that there is something special about this meal, especially when you buy fresh clams online from Boston Sword & Tuna.

Steamers have formed the magnet for millions of New England clambakes, and they bring with them such a festive connotation that “clambake” became a synonym for party. In its purest form, the clambake takes place on a beach, with clams steaming between layers of seaweed. But equally in a Long Island suburb, or even a mountain or desert city, serving steamers seems to bring people closer and lower the guard of social interaction, so fun ensues every time, thanks in large part to the fact that you can buy fresh clams online from Boston Sword & Tuna.

Clams have inspired recipes of fantastic imagination, because of their unique and fulfilling flavor. Yet you don’t have to take on a complex process of preparation to bring them to your own table when you simply buy fresh clams online.

So, here’s how steamers are enjoyed on Cape Cod; it is so simple you can focus solely on the enjoyment. It starts with about three quarts of soft-shell clams from Boston Sword & Tuna.

Put just one cup of water in a large pot. Some folks make that a water-and-beer mixture, or even a water-and-white-wine blend. Bring it to boil while you wash the clams to get sand and mud from the outside shells. The put the clams in a steaming basket, set them inside the pot and cover. Let them steam for just five or ten minutes. The shells will open to tell you they’re ready (discard any individuals that don’t open).

Now remove from the burner and drain, saving the broth. Serve the clams in a big bowl with the broth in a small bowl and melted butter in another, alongside. To eat, we remove the shell, hold the clam by the neck, dip it in the broth and then in the butter – and then enjoy, discarding the handy neck.

Clam chowder – pronounced without the R here in New England and across the Sound on Long Island – is a signature dish. People cultivate an approach all their own, the way folks out west pride themselves on a personal chili recipe. Here’s how to begin a chowder recipe you can refine or embellish, to someday call you own when you buy fresh clams online. This one starts with one quart of clams, shucked and chopped, plus the clam juice you’ll save from that process. First, brown two strips of bacon, using a heavy skillet. Remove the bacon from the skillet and save. Now brown a quarter-cup of diced onions in the skillet until they are translucent. In a saucepot cook ¾-cup diced potatoes in a cup of water and a half-teaspoon of salt for about eight minutes. Add your sautéed onions, the clams, and clam juice to your saucepot. Sprinkle in a half-teaspoon of dried oregano and a quarter-teaspoon of dried basil, and cook for about four more minutes. Here you have your chowder base.

When it’s time to serve, add two cups of milk and a pat of butter to your chowder base and heat to serving temperature. The bacon you prepared in the beginning is for sprinkling on top.

With the ways of enjoying fresh clams so easy, why wait?

We Make It Easy To Buy Fresh Clams Online

As your trusted source for the best fresh seafood online, we’re using our five generations of experience at Boston Sword & Tuna, to make sure you can buy fresh clams online anytime you want.